WWE Superstars try their best to put on the best performance they can at WrestleMania. As such, there have been some absolute classics contested on The Grandest Stage of Them All that the WWE Universe will remember for years to come.

However, every story has two sides, and the same rings true for ‘Mania matches. There have also been matches that fell flat or failed to click with those watching. Even if they were promising on paper, they failed to deliver on the said promise once the bell rang.

In that regard, here are five forgettable WrestleMania matches that have taken place in recent years.

#5. On our list of lackluster matches to have taken place on WrestleMania recently: Goldberg (c) vs. Braun Strowman

Goldberg was set to battle Roman Reigns in a match for the Universal Championship at WrestleMania 36. It was a match with very little build up, which meant fans were not invested in it as much.

However, with Reigns pulling out of the event, WWE had Braun Strowman step in to replace him. The match itself was extremely short, with both superstars trading their best shots.

Strowman refused to stay down despite taking four Spears. He then planted Goldberg with four consecutive Running Powerslams to take a dominant victory over the legend.

Heading into WrestleMania 33, Chris Jericho and Kevin Owens easily had the best storyline with them. Unfortunately, WWE made the two Canadians fight for the United States Championship instead of the Universal Championship.

The momentum Jericho and Owens had for nearly a year fizzled out by the time ‘Mania rolled around. Although the two superstars gave it everything and had a solid encounter, it was hardly the show-stealer it could have been.

Y2J and KO both later revealed that Vince McMahon disapproved of their match. Given how their rematch was a much better contest, we can’t help but agree with the CEO. 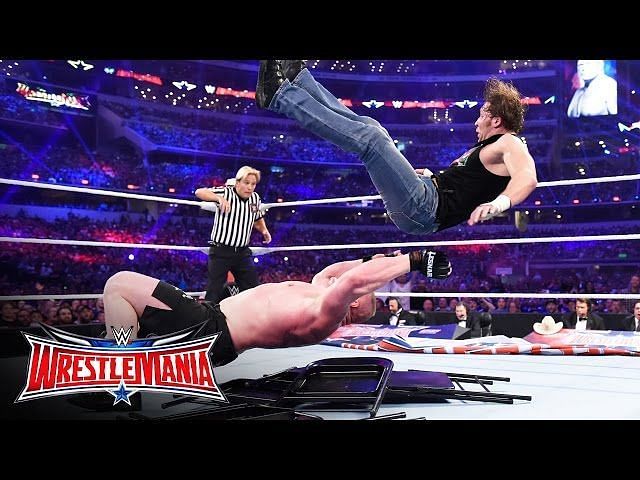 This was a match that had everyone excited beyond belief. Once the final bell had rung, however, fans were terribly disappointed at what they had been given.

WWE orchestrated the rivalry between Brock Lesnar and Dean Ambrose very well. The eventual match was revealed to be a No Holds Barred Street Fight at WrestleMania 32, sending excitement levels through the roof. However, Lesnar and Ambrose barely used any weapons, choosing to wrestle a pedestrian match that saw little of the promised violence.

After a basic match in which The Lunatic Fringe barely mustered any offense, he fell to a single F5 from The Beast. It was a major disappointment given the promise and the caliber of the superstars involved.

The WrestleMania 34 main event between Brock Lesnar and Roman Reigns was one of the worst final matches the show has ever seen. Everything about this one was a disaster.

Although the build-up to the match was better than the one for their WrestleMania 31 clash, fans were firmly rooting against the babyface in Reigns. The negative reaction carried all the way to the match, with everyone voicing their disapproval from start to finish.

Even a last-minute swerve that saw Lesnar hit a sixth (yes, sixth) F5 to retain his championship wasn’t enough to redeem it. Needless to say, if you are looking to watch a Reigns vs. Lesnar matchup, this will not be a priority. 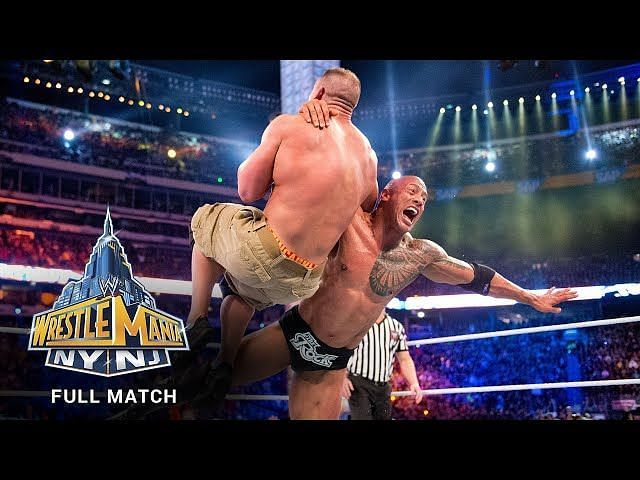 So much for ‘Once in a Lifetime’.

We are still annoyed at WWE for milking the Rock-Cena rivalry for one match too many. Their WrestleMania 28 clash was a phenomenal success from build-up to in-ring work. It was also one of the most-watched matches of all time.

However, WWE decided that they must have a second round between the two superstars a year later. This time, however, fans called Vince McMahon and company out for lying to them about the first match being a one-and-done.

Subsequently, the rematch was a forgettable affair that failed to capture the magic of the original. Cena won the WWE Championship and avenged his defeat a year earlier in a match that has little rewatch value.