WWE Superstars usually have big, lucrative contracts with the company. Getting a good paycheck makes traveling on the road and being away from loved ones a little more bearable for most superstars.

While some have to work extremely hard for every penny that they earn, others use their star power to negotiate good contracts. Over the years, there have been many instances where WWE has signed fresh faces to massive contracts.

But it’s not always rainbows and butterflies in the entertainment world, as many former superstars have suffered since leaving the company. Several big names could not sustain their lifestyle after leaving WWE and went broke months after their departure.

With that being said, take a look at the five top superstars who became broke after leaving WWE.

#5. A former WWE Champion helped Joey Mercury get back on his feet

CM Punk and his Straight Edge Society consisting of Serena,Luke Gallows and Joey Mercury,back in 2010. 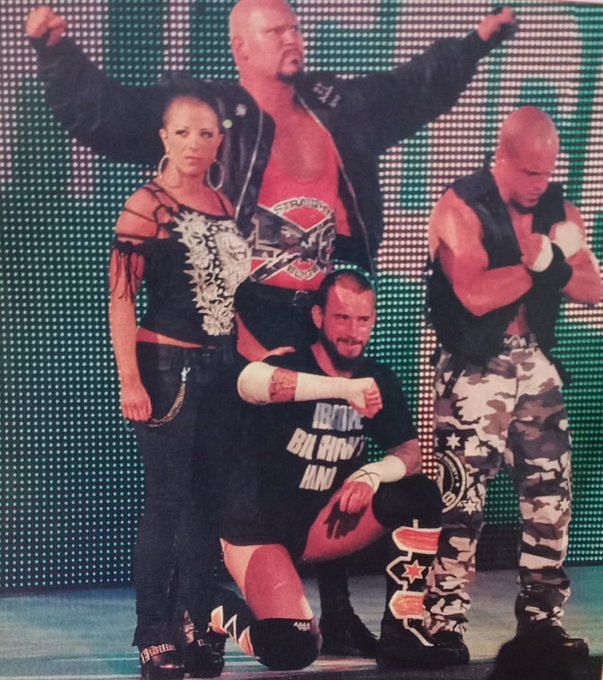 Joey Mercury first gained prominence as part of MNM with John Morrison and Melina in WWE. He had a good run with the faction before an injury took him out of the ring.

In 2007, a ladder struck his face and badly injured his nose. He was out of action for some time but returned to compete with a faceguard. The company released him from his contract soon after, and his career spiraled downwards.

Mercury became addicted to drugs and painkillers, and that severely affected his health. He lost his money, and his house was about to be foreclosed.

CM Punk helped him out during the difficult time and bought the mortgage for him. The Best in the World proved that he cared for his fellow workers. In 2010, Mercury returned to WWE and joined Punk’s Straight Edge Society.

He remained with the company until 2017 and served in different capacities. He worked as a backstage producer and also appeared on-screen as part of Seth Rollins’ J&J Security.

All three members of The Shield praised how he helped them with ideas and was a silent fourth member of the faction.

#4. Lex Luger had a tough time after leaving WWE

Lex Luger became one of the hottest prospects in wrestling in the 1990s. His physique and charisma helped him get over in the wrestling industry. WWE tried to push him as the next Hulk Hogan and gave him the American Patriot gimmick.

He had a good run in the company before WCW pulled him away with a lucrative contract. After WWE bought over WCW, they released him from the company.

His personal life derailed after he got addicted to drugs. He was arrested thrice in 2003, and his girlfriend, Miss Elizabeth, who was living with him, died soon after.

Luger spent several nights in jail and had to pay huge amounts for his bail and legal bonds. That ate into his savings, and Luger was soon completely broke.

Things got worse for the former Royal Rumble winner after a spinal injury paralyzed him. The company helped him out by signing him to their Wellness Program in 2011. He is now completely clean and is living a sober life.

#3. Jake ‘The Snake’ Roberts spiraled out of control after leaving the company

Jake “The Snake” Roberts was once considered the biggest heel in WWE. The former superstar would come out with a giant snake named “Damian” to terrorize his opponents and gain a lot of heat.

He left the company in 1990s and tried his hand at different promotions. A contract with WCW did not work out the way it was initially promised, and things went from bad to worse for Roberts.

He started abusing alcohol and drugs again and his life derailed from thereon. The wrestling documentary “Beyond the Mat” covered how he lived a depressing life both before and after his in-ring career.

He blew off his money on his addictions and paid fines. In 2004, his pet snake starved to death while weight problems got the better of him. He survived off sporadic appearances he made at wrestling shows while WWE sponsored his rehab program.

Life only got better for the former superstar after Diamond Dallas Page (DDP) introduced him to yoga and got him off drugs once again. He has since been part of several films, documentaries, and wrestling shows which have helped him get back on his feet. He is currently signed to AEW.

#2. Ric Flair has blown off his money a few times

Ric Flair is arguably the most decorated wrestling legend of all time. The former WWE Superstar helped the company reach new heights with some incredible matches and performances. He also managed the faction Evolution, which helped the company build stars like Batista and Randy Orton.

Behind the scenes, Flair had his fair share of personal problems. He married and divorced four women, and his alcohol problems started to get worse as he was charged in 2005 for a road rage incident.

He started a business called “Ric Flair Finance” in 2007, which filed for bankruptcy a year later. He also became part of a few lawsuits involving major promotions.

This led to him going broke a few times when he was not part of the company. However, Vince McMahon helped him through and even gave him a loan of $800,000 to help him pay his bills and fines.

“I owed Vince, paid back Vince. He gave me an $800,000 loan and told me to declare bankruptcy. I knew that I couldn’t live with myself if I did.”

Flair shares a good relationship with Vince, and that has benefitted him throughout his career. The Nature Boy is one of the top names who went broke after leaving the WWE ring.

Batista is currently one of the biggest names in the world of entertainment. The Animal is ruling the silver screen after bagging some big Hollywood projects.

Many fans know about Batista’s rise in the business. However, not many would know that he went broke after leaving WWE in 2010.

He had a great WWE career that saw him win several championships. He had a good run before walking out in 2010. He was living a luxurious life at the time, but the move proved to be costly for The Animal.

In an interview, he revealed that he went broke eight months after leaving the company and lost everything.

“So about eight months later I walked out the door and they didn’t think I was going to. I walked out on top. I was very comfortable. I was making a very good living and I walked out. Then I starved for three years. I went broke and lost everything. I couldn’t get a job. I said, ‘I will never go back to wrestling until I prove what I set out to prove that I could make it as an actor,’” he said.

Batista landed a top role in Marvel’s Guardians of the Galaxy franchise in 2014. That helped him gain prominence in the action world, and he hasn’t looked back since. He also returned to the company for a couple of short stints before hanging up his boots for good.