Goldberg is perhaps one of the most popular wrestling names around the globe. His undefeated streak of 173 matches is bonafide wrestling folklore.

When WWE eventually bought its rival WCW, it also acquired several talents, including Da Man. Since his debut under Vince McMahon’s promotion, he has been depicted as a force to be reckoned with.

Though he is primarily famous for his undefeated streak, he was not invulnerable throughout his career. Even the greatest in the industry like Ric Flair, The Rock, Steve Austin, Triple H, and John Cena have had their fair share of defeats, and Goldberg is no exception.

The WCW legend has been defeated in WWE a handful of times. Apart from the singles contest, he has been pinned in a couple of multi-man matches.

The first was when Triple H defended his title in an Elimination Chamber match at SummerSlam in 2003. He squared off against Goldberg, Chris Jericho, Kevin Nash, Randy Orton, and Shawn Michaels. The Game eventually pinned Goldberg to stand tall.

However, our list will only focus on those who have defeated the Hall of Famer in a singles match in Vince McMahon’s company.

At #WrestleMania 33, @BrockLesnar joined an elite group of Superstars who can proudly say, “I DEFEATED @Goldberg!” wwe.me/3J1Anv 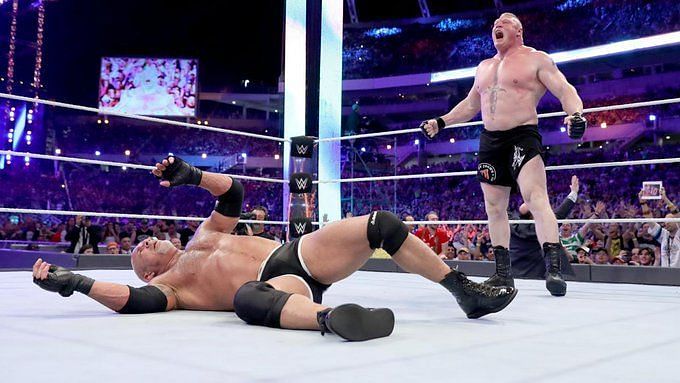 As shocking as it may sound, the first defeat The Hall of Famer suffered in a singles match in WWE was in 2017. Following his return in the previous year, he targeted Brock Lesnar.

The narrative of their rivalry stretched for years. Goldberg defeated Brock Lesnar back in 2004 and then humiliated him at the Survivor Series in 2016 and Royal Rumble the following year.

The WCW Superstar won the Universal Championship on the Road to WrestleMania 33. Not only did Lesnar win the title, he also handed Goldberg the first clean singles loss of his career with an F-5.

As mentioned above, this was the first time The Myth lost a singles match in WWE. He took a break from wrestling for more than two years following this defeat.

WWE announced a dream match between The Undertaker and Goldberg for Super Showdown in 2019. The Saudi Arabia event saw the two titans locking horns for the first time in their careers.

However, a series of unfortunate events occurred during the main event match, including a botched jackhammer and tombstone piledriver. Luckily, both legends avoided career-threatening injuries.

At last, it was The Phenom who stood tall in the ring after a chokeslam to his rival. 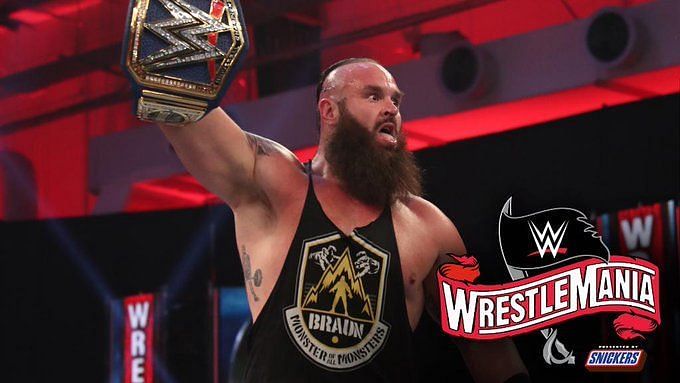 The Hall of Famer returned to action in early 2020 when he challenged The Fiend for the Universal Championship. Their match was contested at WWE Super Showdown, where The Myth squashed The Fiend for victory.

However, this reign wasn’t memorable as he lost the belt in the first title defense. He was scheduled to defend it against Roman Reigns at WrestleMania 36. However, due to the widespread effect of COVID-19, Reigns pulled himself out of the match and was thus replaced by Braun Strowman.

The Monster Among Men then defeated the Universal Champion in a clean fight.

The WCW legend returned to Vince McMahon’s company at the beginning of 2021. He instantly challenged then-WWE Champion Drew McIntyre for a title match, which the latter accepted.

They squared off at the Royal Rumble that year. Though the match lasted nine minutes and thirty seconds, their brawl ensued before the match. The two behemoths exchanged blows ringside before the bell rang.

Ultimately, The Scottish Warrior emerged victorious with a Claymore kick. Following the match, Goldberg stood up to praise McIntyre for his performance.

It’s been a long time coming @Goldberg. Unfortunately for you, you’re in my way to becoming the best @WWE Champion of all time. 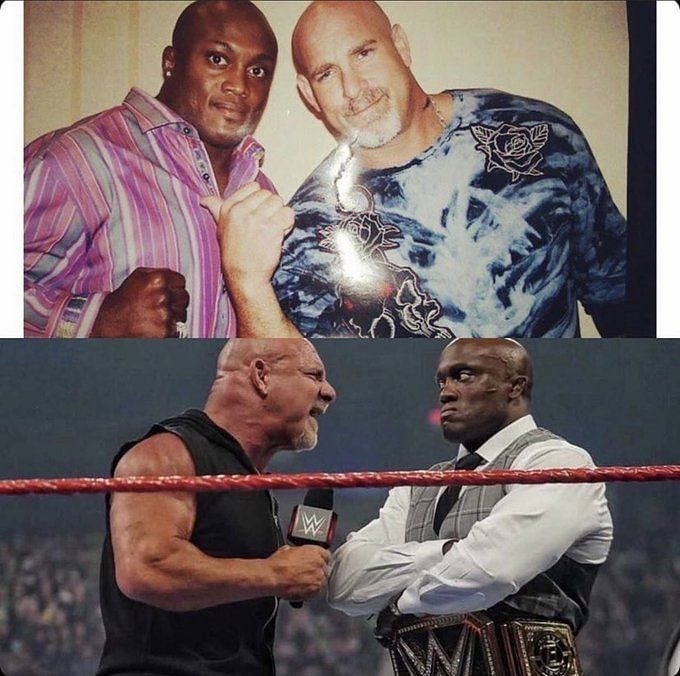 The Hall of Famer returned to challenge a world champion in late 2021. On the road to SummerSlam, he challenged Bobby Lashley for his WWE Championship, who initially rejected his proposal. However, the match was officially booked anyway.

At SummerSlam, Goldberg and Bobby Lashley had an intense brawl. Lashley’s manager MVP interfered, attacking the challenger with a cane during the match.

The All-Mighty took advantage of the situation and brutally attacked the injured knee. The referee announced that the former Universal Champion was not able to continue the match. The victory was thus awarded to Bobby Lashley.