The WWE Hall of Famers, The Undertaker, and Kane were a massive part of the WWE Universe. We knew the Undertaker and Kane as ‘The Brothers of Destruction’. Mark Calaway (Taker) and Glenn Jacobs (Kane) highlighted the most illustrious teams in the tag team division. Even though the two men may have battled inside the squared circle, they worked in an exciting storyline.

Paul Bearer represented The Phenom in the WWE and wanted to do it for the long term. However, when Taker refused and took a stand for himself, WWE Hall of Famer made a shocking revelation.

On an episode of Monday Night Raw, Bearer unveiled that ‘The Deadman’ had set his house on fire where he grew up. This was how the first time the company introduced the family angle of The Undertaker to the WWE Universe.

Did WWE ever think of adding more members to The Undertaker and Kane family angle?

The WWE Veteran, Bruce Prichard, and Conrad Thompson on the Something to Wrestle podcast discussed Taker’s WWE family storyline. Back in the late 90s, when Kane was introduced as Taker’s younger brother, it intrigued WWE fans.

However, it was also rumored that the late Paul Bearer would reveal more members into the family angle of The Undertaker and Kane. The WWE Executive shot down the whispers, stating that even putting Kane into a family angle was difficult for the WWE creative.

Prichard mentioned. “No, it was pushy to get Kane in there and then pushing it even more to reveal that, ‘Paul Bearer did up with his mama.”

According to Prichard, it was already a twisted storyline that included Kane as Taker’s younger brother. Hence, WWE never thought of adding more members to Undertaker’s family.

How was The Big Red Monster introduced to Taker’s family?

According to the storyline, Taker believed everyone in his family passed away in the tragic fire, but Bearer kept Kane hidden. But when late Paul Bearer revealed this information, wrestling fans did not witness Kane on the Raw episode. So naturally, this picked the curiosity of WWE fans. Then, WWE featured the Big Red Machine Kane at the Bad Blood 1997 event for the first time.

In a Hell in a Cell match, The Deadman squared off against ‘The Heartbreak Kid’ Shawn Michaels. During this match, Michaels stayed away from Taker by attacking the cameraman. However, right before when The Undertaker was up for the Tombstone finisher on Michaels, lights went out, and organs played in the background. 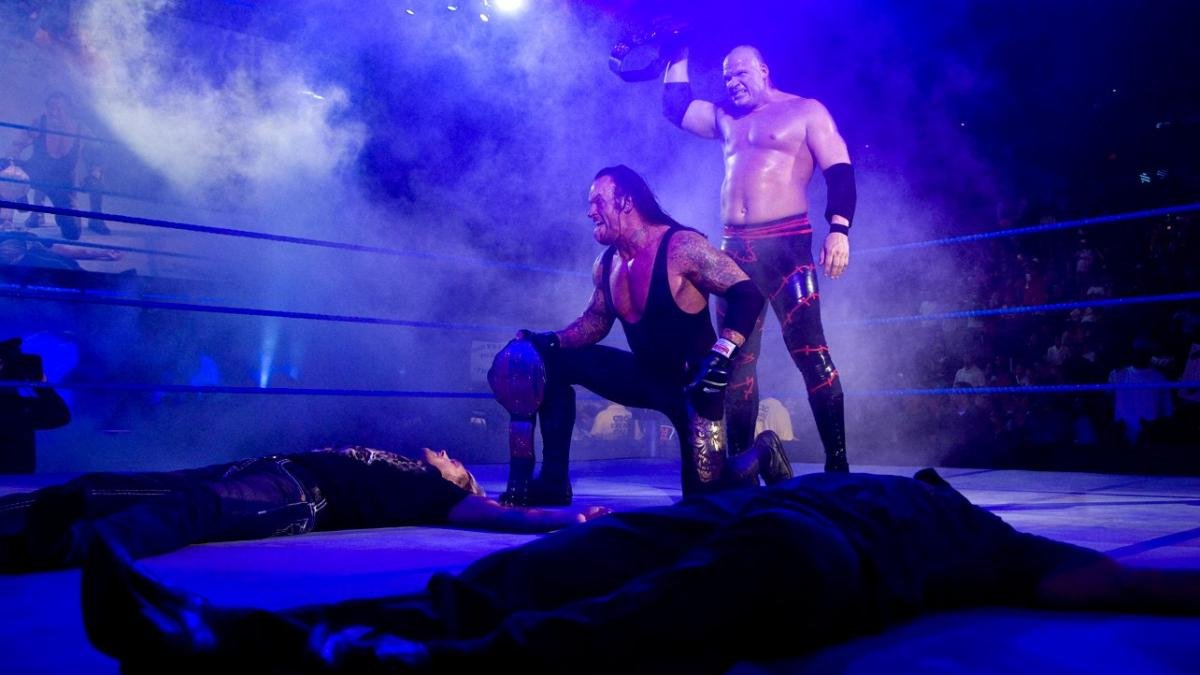 This was the moment when Paul Bearer entered the arena with the 7 ft. giant Kane. Taker was in disbelief that his younger brother Kane was actually alive, as per the storyline. However, The Big Red Machine ripped the Hell in a Cell door and attacked The Phenom, which helped Michaels pick up the victory.

The fans most appreciated a twisted storyline that brought Kane and Undertaker as Brothers of Destruction. However, there were no plans to bring more members to The Undertaker’s family.