Drew McIntyre teamed up with a fellow WWE Superstar after three

The Bloodline (Roman Reigns and The Usos) was in action after SmackDown went off the air. The trio were terrorized by an out-of-control Brock Lesnar earlier in the night and certainly weren’t in a good mood.

After SmackDown went off air, they took on former WWE Champion Drew McIntyre, Shinsuke Nakamura, and Rick Boogs in a six-man tag team match. It should be noted that this was the first time in three years that McIntyre teamed up with Nakamura in WWE.

The two superstars have teamed up on one occasion in the past. At WWE Crown Jewel 2019, McIntyre and Nakamura were a part of Team Flair that lost a 10-Man Tag Team match to Team Hogan.

Interestingly, Roman Reigns was a part of Team Hogan at the time and was a full-fledged babyface, while McIntyre and Nakamura were heels. A lot has changed over the past three years, and Reigns is the biggest heel in WWE today.

Check out some tweets highlighting the match:

McIntyre, Boogs, and Nakamura teaming up in the dark match. #SmackDown 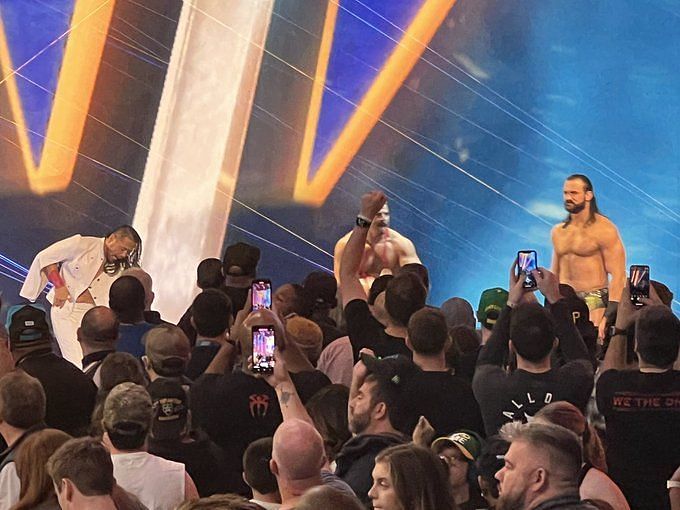 WWE Universe OF The Future

@HeymanHustle is NOT happy from Audiance.

Unfortunately, McIntyre has slid down the card this time around and will face Happy Corbin at the Showcase of the Immortals this year. He has been feuding with Corbin and his ally Madcap Moss for quite some time now.

Nevertheless, The Scottish Warrior is focused on putting Corbin down for good on The Show of Shows and moving on to bigger and better things.

Meanwhile, Roman Reigns will be taking on arch-rival Brock Lesnar in the main event of WrestleMania 38. The Tribal Chief’s Universal title and Lesnar’s WWE title will be on the line in a Winner Take All match. The winner of the match will leave WrestleMania with both title belts on his shoulders.