The retired WWE Superstar Stephanie McMahon is also a successful American businesswoman. Stephanie McMahon Levesque is one of the most influential figures in the company as she is currently working as Chief Brand Officer in WWE. ‘The Billion Dollar Princess’ aka Stephanie McMahon, has been married to ‘The Game’ Triple H since 2003.

The daughter of Vince McMahon tied knots with fellow WWE Superstar Triple H on October 25, 2003, at St. Teresa in New York. It’s been 19 years since the couple has been married happily.

However, before meeting Triple H, The Billion Dollar Princess has been involved in a few on-screen and off-screen relationships.

In the late 1990s, Stephanie McMahon, in her father’s company, was a part of a few love angles which played a crucial role for the WWE.

In the summer of 1999, The Billion Dollar Princess began her relationship with Andrew Martin, aka Test. However, the relationship between Stephanie McMahon and Test was not accepted by her brother, Shane McMahon. 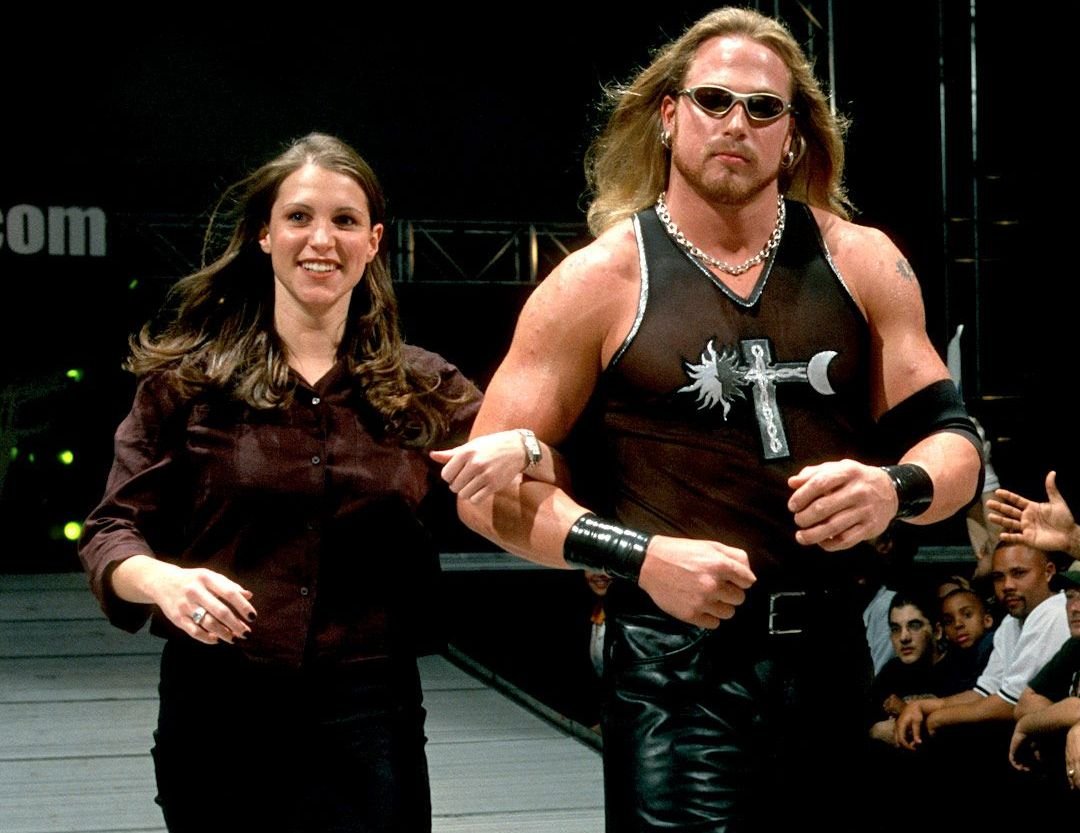 The disapproval of Shane McMahon led to a start of a feud between Stephanie’s brother and lover. So, at WWE SummerSlam 2000, Test and Shane McMahon battled in a ‘Love her or Leave her’ street fight match.

Although, the late Andrew Martin defeated Shane O’Mac in that match and gave his blessings to the beautiful former on-screen couple. Test and The Billion Dollar princess celebrated their wedding inside the squared circle until Triple H crashed their wedding.

When The Game interrupted Stephanie’s and Test’s wedding ceremony, he claimed he had already married Vince McMahon’s daughter.

During the peak of the Attitude Era, Stephanie McMahon was involved in a love triangle angle with Kurt Angle and Triple H. However, in an old-school WWF interview, the Olympic Gold Medalist revealed how WWE played around the romantic interest between Stephanie and Kurt.

Angle said, “You know what, Stephanie and I, it was funny; we didn’t have an attraction. We had a good friendship, and we were attracted to each other in that way. So someone saw that. And Stephanie was trying the whole deal with Triple H, what they were doing at the time. And they were thinking who could they use to kind of make Triple H jealous and who was an upcoming guy.” 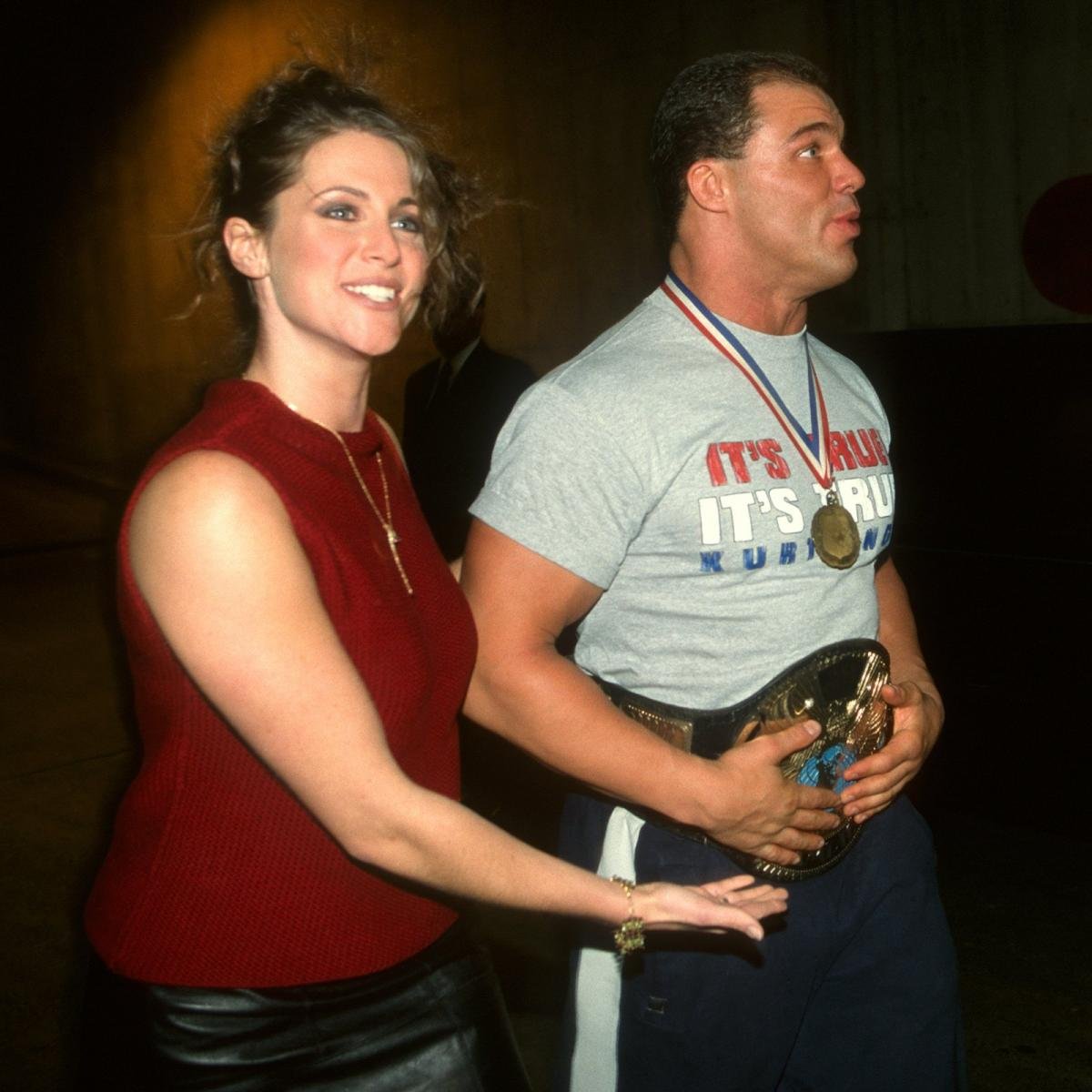 “So the whole thing happened because Stephanie and I somewhat were pretty good friends, and we looked like we would be a good couple to be together, and so the writers went with it. Triple H was cool about it. We did the whole thing, and I know he was dating Stephanie for real and everything, and he didn’t mind doing it,” Kurt Angle mentioned.

Although, Kurt Angle and Triple H got involved in an on-screen rivalry to win the heart of Stephanie McMahon. The Billion Dollar Princess sided with Kurt Angle instead of her husband. However, the love triangle angle was short-lived as things got uncomfortable amongst the trio.

The King of the Kings Triple H!

Vince McMahon’s daughter Stephanie McMahon dated Paul Levesque, aka Triple H, on-screen and in real life. They started dating in real life in the 2000s during the WWE McMahon-Helmsley Era storyline. This was right after Triple H crashed Stephanie’s wedding as a part of the storyline. 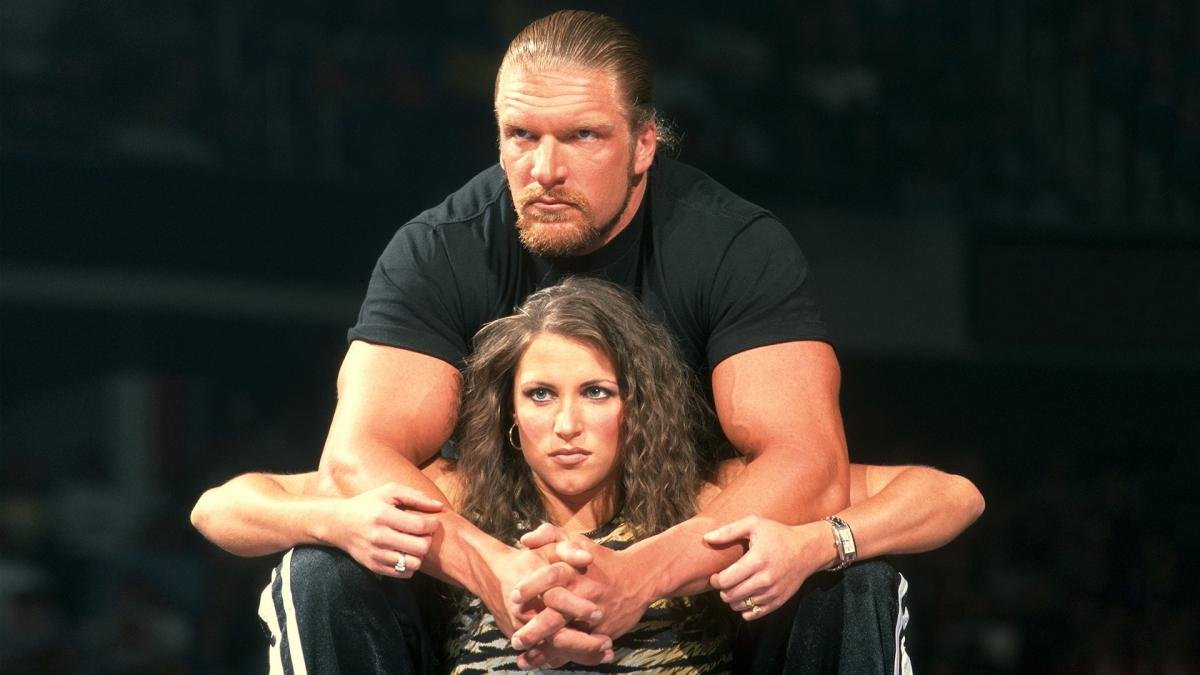 However, WWE Boss Vince McMahon initially did not react well to his daughter’s and Triple H’s relationship. But eventually, Paul Levesque and Stephanie dated for a few years and convinced Mr. McMahon until he finally gave his blessings.

Stephanie McMahon went out of the wrestling industry

According to WWE Executive Bruce Prichard, the gentleman Stephanie dated before Paul Levesque was a baseball player. In an episode of Something to Wrestle, Bruce Prichard revealed that The Billion Dollar Princess had a boyfriend while she was involved in a storyline with The Game.

“She had a boyfriend. During this time, we’re in 1999. She had a boyfriend all the way until roughly 2001. It was the 2000; I got to think how I remember meeting them and stuff. Yeah, she had a boyfriend, best of my knowledge. I only met a couple of her boyfriends, and they were all nice guys. The last one before Triple H was, I think, a baseball player. A real quiet nice guy,” Bruce Prichard mentioned.

However, Stephanie McMahon ended her relationship with this baseball player before she actually started dating Triple H.

The former WCW legend Randy “Macho Man” Savage and Stephanie McMahon reportedly had a brief relationship. However, The Billion Dollar Princess and Randy Savage never revealed much about their alleged relationship. 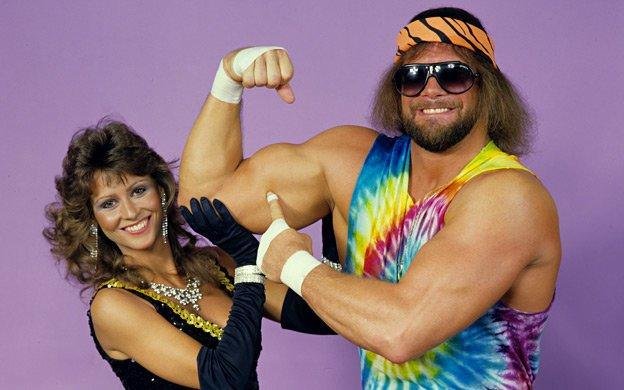 It was rumored in the 90s that 40-year-old Randy Savage had an affair with Stephanie when she was just a teenager. This rumor was the biggest blow to the wrestling career of Randy Savage as Vince McMahon banned him from WWE for life.

Even though Stephanie McMahon seemingly dated a few guys, her heart was only meant for one man. Triple H and Stephanie McMahon are the power couple of WWE and inseparable. The couple has had several peaks and lows, but they are happily married to this day with three beautiful daughters.