Roman Reigns is rumored to face Drew McIntyre at the Clash at the Castle event in September in the UK. However, plans might change if boxing legend Tyson Fury agrees to return to WWE. In that case, McIntyre will face Fury instead of Reigns.

Drew McIntyre and Roman Reigns have had a storied history. The Scottish Warrior is a two-time WWE Champion but has never vanquished The Tribal Chief. The two men recently faced each other in a six-man tag team match at WrestleMania Backlash, won by Reigns’ team.

As per Dave Meltzer of the Wrestling Observer Newsletter, the current plan for Reigns vs. McIntyre could change if Tyson Fury returns to WWE and is part of Clash at the Castle:

“The plan for the show as of right now is Roman Reigns vs. Drew McIntyre as the main event, but if Tyson Fury is part of the show, it could change to him against McIntyre.”

Tyson Fury is a two-time world heavyweight champion in boxing and one of the most controversial and popular stars in the United Kingdom.

Watch: Drew McIntyre on a dream match opportunity to face Tyson Fury, Premium Live Event in the UK and more

Should Drew McIntyre face Roman Reigns at Clash at the Castle?

Tyson Fury is one of the biggest names in the UK. He has been trading shots with McIntyre on social media for some time, which has led to people believing the two men will square off against one another. Fury’s last match in WWE took place in 2019 when he faced Braun Strowman at Crown Jewel.

Even though McIntyre vs. Fury would be massive, many fans have been waiting for Reigns and McIntyre to go one-on-one. If WWE plans on The Scottish Warrior finally beating Reigns, Clash at the Castle would be the perfect opportunity.

UK, are you ready for WWE Clash at the Castle?! Be one of the first to get your tickets now using presale code: MCINTYRE #WWECastle

ps, these are the pre-sale limited tickets. General sale is tomorrow! 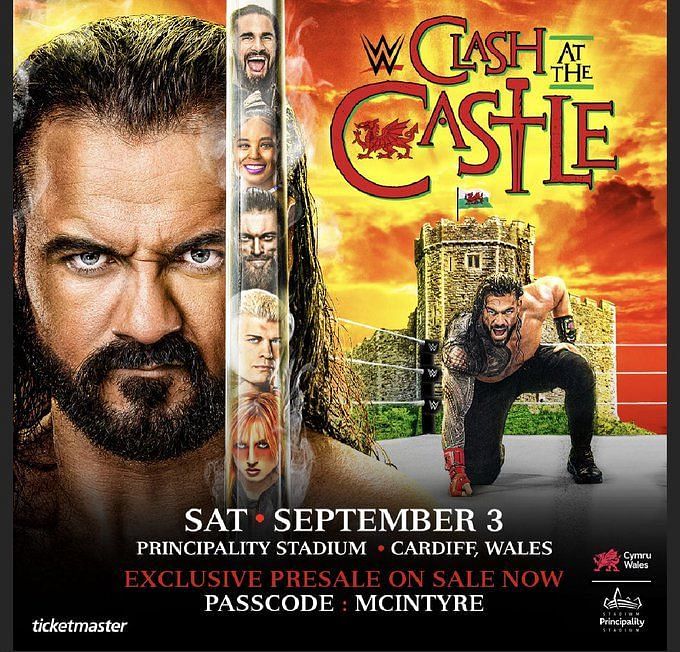 Previous reports stated that the company has been delaying a match between the two men so that it takes place in McIntyre’s home country on a major show.