From Madusa dumping the WWF Women’s Championship into the trash on WCW Monday Nitro to seeing “The Phenom” outside of WWE, here are five times “The Forbidden Door” was opened in wrestling!

The Forbidden Door in Wrestling

Thanks recently to Tony Khan and AEW, “The Forbidden Door” has become a phrase synonymous with the secret world of negotiation and partnership in professional wrestling since 2019. However, this forbidden door in wrestling has opened many times in the past.

An example of opening the forbidden door is when talent (whether they be wrestlers, managers, commentators, or ring announcers) unexpectedly shows up in another rival’s promotion. These exciting moments start a fire and leave their mark on fans. Here are five such examples.

1. Madusa Takes Out the Trash

The following example isn’t just a wrestler showing up on another show but showing up with the rival’s title and, without hesitation, throwing it in the trash. Yes, this is the work of Debra Miceli, better known to wrestling fans as Madusa and Alundra Blayze. 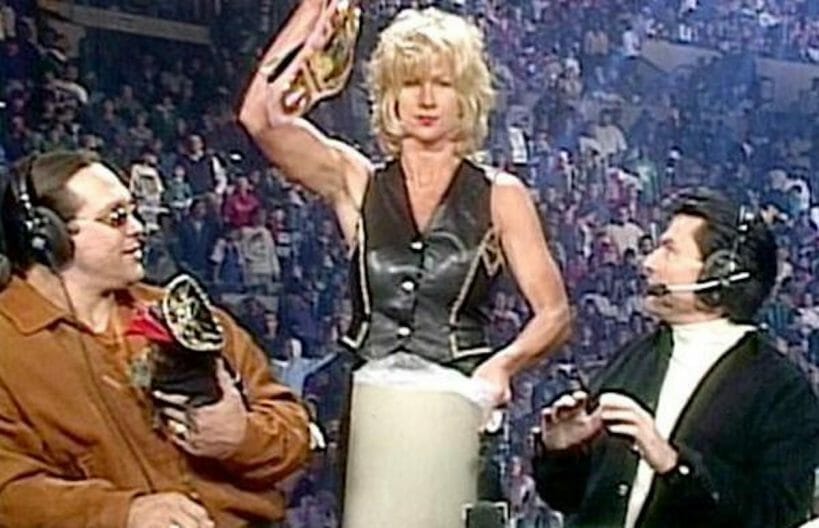 Madusa dumps the WWF Women’s Championship into the trash live on WCW television — a moment she would later regret.

In 1995, Madusa, then going by Alundra Blayze, was in a storyline where she was dropping and reclaiming the title multiple times against Bertha Faye. Towards the end of her time with the then WWF, she and the other parties involved knew WWE wouldn’t renew her contract and soon was wished well on her endeavors.

Still the WWF Women’s Champion upon her release, Madusa did not have the opportunity to return her title. The head of WCW, Eric Bischoff, caught wind of this unusual situation and asked Madusa to bring the title to television.

Since she had already signed with WCW, Eric had a storyline ready for a situation like this.

In one of the most iconic and controversial images of the 1990s, Bischoff convinced Madusa to dump the WWF title into a trash can live on WCW Monday Nitro.

During her time in WCW, she was an integral part of establishing their new Women’s championship. She competed for the title at both Starrcade 1996 and The Great American Bash in the same year. She was a superstar in an up-and-coming women’s division in WCW before taking a brief hiatus and returning to wrestling in 1999.

In all of this, Madusa felt regret. Often expressing remorse for this moment in interviews that have followed, Miceli found herself blacklisted by the WWF. Feeling coerced into Bischoff’s act, Miceli has also very honestly explained that she could have said no, of course, but was concerned about her new job.

Fortunately, things have grown friendly again between Miceli and the WWE, and she was inducted into the WWE Hall of Fame class of 2015. During her induction speech, she proudly removed the title from a trash can that she brought on stage, jokingly stating it was finally home after twenty years.

In 1997 and ’98, members of the National Wrestling Alliance invaded WWE TV. This included multiple title defenses and programs where WWE stars feuded with their NWA counterparts.

During the build to 1998’s Royal Rumble, along with the “NWA Invasion,” natural rivalries were formed. Jeff Jarrett was, however, the only NWA representative allowed to compete in the Rumble, leaving him with no allies from his promotion, but this story was only beginning.

During the Rumble match that year, Owen Hart, was on his way to the ring when the NWA North American Champion stopped him in his tracks. Alongside his manager, Jim Cornette, “Double J” took Hart out of the action, only to later return and eliminate Jarrett from the match.

Owen and Jeff would eventually hold tag team gold together before Jarrett’s departure and return to WCW in October 1999.

There once was a rowdy stable from Badstreet, Atlanta, Georgia, who ran roughshod on every territory in America: The Fabulous Freebirds.

The Freebirds held multiple regional titles across various promotions at the time, which became a sticky situation regarding scheduling. To get around this, the NWA and governing body wrote in a “kayfabe” rule stating that any two members of the stable could defend the titles on any given night, meaning theoretically, The Freebirds could defend their titles on the same night in multiple territories.

The Freebirds could and would show up anytime, on any given night, and put on a show. This allowed the territories to have an element of surprise, not knowing who would show up to battle. At times, this made their challengers as unsure as the fans were. It was a huge selling point for the territories, and it wasn’t long before other groups such as The Midnight Express and The Heavenly Bodies began using the newly coined “Freebird Rule” in their favor. It is a rule that has been used in wrestling ever since.

In 2019, a rivalry was built between Lance Archer, an independent star at the time who had dug his heels into the New Japan Pro Wrestling locker room, and Jon Moxley, who was fresh off his AEW debut and free to run amock in the wrestling world.

On October 13, 2019, Moxley was forced to vacate the IWGP United States Heavyweight Title due to travel issues stemming from Typhoon Hagibis. Archer would win the vacated title to become the new champ.

On December 9, Moxley returned and interrupted Archer after his final match in the 2019 World Tag League tournament, attacking Archer and Minoru Suzuki before challenging the former to a Texas Deathmatch for the United States Heavyweight Championship at Wrestle Kingdom 14 in January 2020. Moxley would eventually defeat Archer by knockout to capture the championship for the second time.

This rivalry would soon spill over into America once both men settled into the AEW roster.

The forbidden door would soon open again, as NJPW superstar KENTA made a surprise appearance at AEW’s Beach Break event on February 3, 2021. With his IWGP US Cup briefcase in hand, he made it clear that he was coming for Moxley’s IWGP United States Heavyweight Championship.

KENTA and Moxley’s rivalry continued into New Japan’s The New Beginning USA on February 26, 2021, where Moxley would eventually retain his championship.

Archer would then return to the fold, and in July at Fyter Fest, he would regain his lost IWGP US title, and he did so on AEW television.

This opened the door for other Japanese legends such as Minoru Suzuki to have a chance to show American wrestling fans what the Japanese Strong Style is all about.

At All Out in September 2021, Suzuki stepped through the door and attacked Moxley in an AEW ring. This helped further bolster the growing relationship between the two promotions.

With the help of music mogul Rick Rubin, loud-mouthed manager Jim Cornette successfully started up a wrestling promotion of his own in the early 1990s. Rooted in Tennessee, Cornette hoped to continue to hold the “old school” territory feel of wrestling. With his connections in the business, he was able to secure and develop young rising stars such as Kane, Chris Jericho, Lance Storm, and even ECW legend New Jack.

During this time, Cornette negotiated a working relationship with Vince McMahon, allowing McMahon to use SMW talent. In exchange, WWF legends such as Shawn Michaels and the Undertaker would be able to make their way through the Smoky Mountains.