We’re back with the latest edition of WWE News and Rumor Roundup. As per reports, there’s been backstage frustration regarding the booking of a specific division lately.

Brock Lesnar’s upcoming match in Saudi Arabia will likely be a newsworthy development. But what will The Beast Incarnate do after that? A two-time NXT Champion has expressed that he would like to team up with his fiancée in an intriguing mixed tag match.

Today’s roundup also features a currently retired star’s cryptic tweet and Dominik Mysterio highlighting why he debuted without a mask.

Without further ado, let’s take a closer look at these recent stories:

Main event feuds between the women of WWE are regularly given a proper spotlight on television. However, many female superstars in the lower and mid-card divisions have been subjected to poor booking recently.

According to Sean Ross Sapp of Fightful Select, both on-screen talent and staff have expressed frustration over the matter.

WWE’s announcement of the first-ever Queen’s Crown Tournament initially seemed like a step in the right direction. However, it kicked off in underwhelming fashion on last week’s SmackDown, as the matches – Toni Storm vs. Zelina Vega and Liv Morgan vs. Carmella – collectively lasted less than four minutes.

Although Carmella emerged victoriously against Morgan, Sapp noted that there were plans for the latter to win instead at one point ahead of their bout.

In addition to the lack of time for certain women’s matches, teams like Tegan Nox-Shotzi Blackheart and Natalya-Tamina split during this year’s WWE Draft, leading to a deficit of challengers for the women’s tag team champions – Rhea Ripley and Nikki A.S.H.

What is your opinion on how the company’s higher-ups have booked female superstars lately? Let us know in the comments section below.

Brock Lesnar will challenge Universal Champion Roman Reigns at WWE Crown Jewel in a few days. As per Paul Davis of WrestlingNews.co, The Beast Incarnate isn’t slated for any more shows this year and will directly wrestle at the Royal Rumble event in January.

Additionally, WWE officials are very pleased with Reigns’ current run, who is the company’s top merchandise seller. As a result, there are no plans for him to drop the Universal Championship this year.

The above report hints towards a possible spoiler for Brock Lesnar vs. Roman Reigns, unless WWE swerves everyone by booking The Beast Incarnate to win.

Karrion Kross went live on Instagram with WWE Deutschland not too long ago. When asked about teaming up with Scarlett at some point down the road, the two-time NXT Champion stated that a mixed tag match against Triple H and Stephanie McMahon could “blow the roof off the place.”

“Well, since you asked me, because I don’t try to — I like to see what fans think and see and then play off that. I don’t like leading people into stuff. I feel like it’s a sort of cheap way to do things. But if you’re asking, I would say Triple H and Stephanie [McMahon]. Under the right circumstances and the right place and the right time, I think if something like that could happen, I think we could all blow the roof off the place. I really do,” said Kross.

Kross and his fiancée haven’t showcased their wrestler-manager equation on the main roster, and they are yet to team up in a WWE ring.

On the other hand, Triple H and Stephanie McMahon fought as tag partners during WrestleMania in 2018. Would you like to see the power couple face Scarlett and Kross one day?

#2 Is Paige’s cryptic tweet hinting at her potential in-ring return?

Paige has previously highlighted her desire to return to the WWE ring at some point down the road. A few years ago, the two-time Divas Champion retired from in-ring action due to a neck injury.

Paige’s last match took place in December 2017, and she recently posted a picture via Twitter, possibly hinting at lacing up her wrestling boots once again: 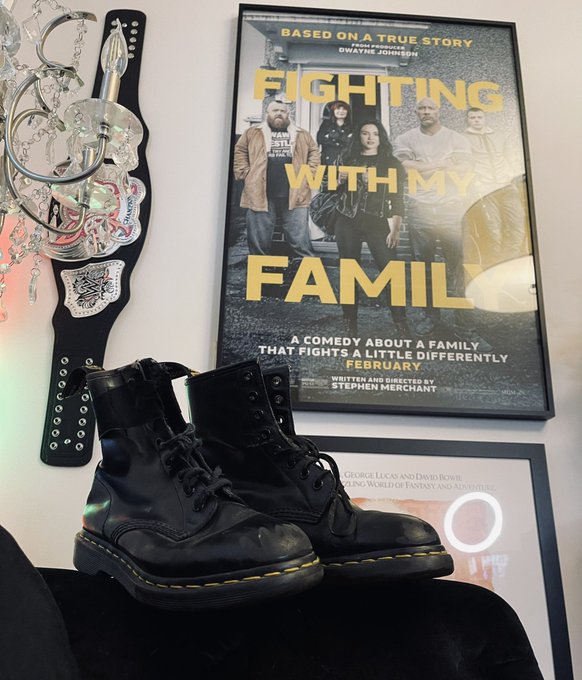 If or when she returns to the squared circle, which opponent would you like her to face in WWE? Not too long ago, Paige mentioned that a match against Sasha Banks could be an intriguing direction for her in the future.

Dominik recently told Sportskeeda Wrestling’s Kevin Kellam that there were backstage discussions about him wrestling with a mask as part of his attire in WWE, just like his father, Rey Mysterio.

Despite those discussions, the young superstar made his in-ring debut against Seth Rollins without wearing one. As far as the reasoning behind this decision is concerned, Dominik stated that there was no point in putting the mask on since fans had already seen his face on television in a few high-profile moments over the years.

“It was thought about, it was talked about. When I would go and train, I would train with a mask on, just so I would know the feeling, how to get used to it. Moving it around, things like that, breathing. So yeah, I would train with the mask on, ’cause I wanted to debut with the mask on. I wanted to debut traditionally as a Mysterio with the mask.” Dominik continued, “But, everything happened so fast, and all these opportunities started presenting themselves. My face was already on TV, so there’s no point in putting a mask on.”

Even without the headwear, his WWE debut against Seth Rollins was undoubtedly one of the best moments of SummerSlam 2020.

The 24-year-old star also told Sportskeeda Wrestling that wearing a mask on television could work as a passing-of-the-torch moment with Rey Mysterio in the future.